Update on what happened across the GNOME project in the week from July 08 to July 15.

I am pleased to announce that TWIG is having its first anniversary! 52 weeks ago, 52 TWIG issues later, or to put it simply - one year ago I launched TWIG!

The first issue was published on July 16, 2021, and was named "#1 Scrolling in the Dark". After discussing the concept with some other GNOME contributors, we had to search for “news” in order to have enough material for the first issue.

Now, one year later, it gives me great pleasure to announce that we have set a new record for news on the anniversary. There has never been that many news as this week in the whole year! I am cautiously optimistic, and claim the concept has now become established in the GNOME community, and is being used by more and more projects to quickly and easily announce news.

What do you think about TWIG? Do you have any suggestions for improvements? Criticism? Compliments? Let us know! You can contact us in our Matrix #thisweek:gnome.org room anytime!

But now to the actual news - Next year is sure to be at least as exciting!

GUADEC is already happening! You can find the complete timetable here and most information on https://guadec.org

This year the event is hybrid: some of us are lucky enough to be able to make it to Guadalajara, but for those who aren’t, the talks will be broadcasted online as well.

Register on https://guadec.org to get all the details on how to join the event remotely. 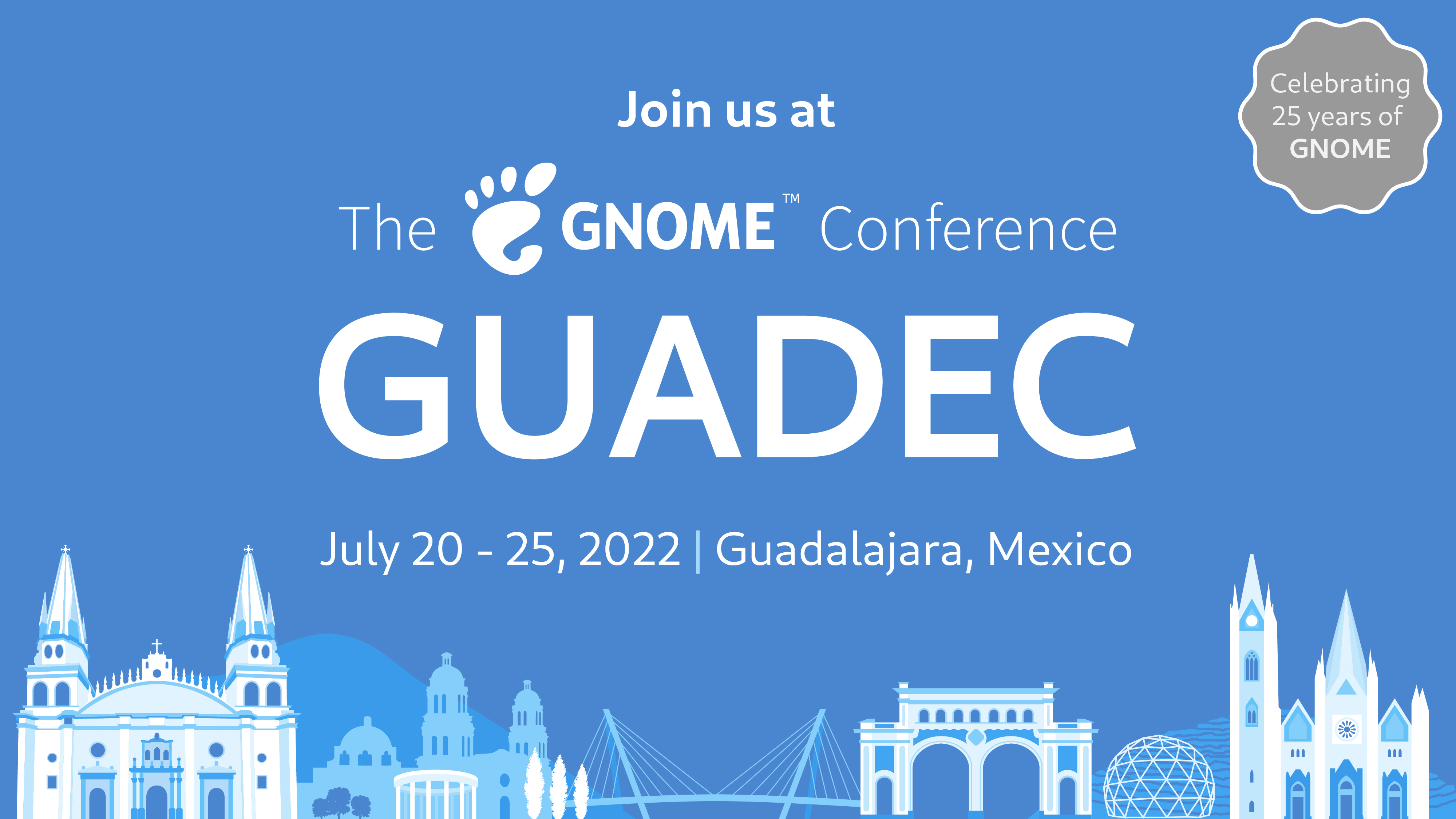 Files 43.alpha has been released, with the largest change set for an alpha release since version 3.29.90

Nautilus now uses AdwFlap for the sidebar. At small sizes the sidebar automatically hides, and a button to show it appears. The sidebar can also be shown and hidden with a swipe on touchscreens.

with the merging of AdwAboutWindow, I’ve submitted MRs to port multiple apps to the new window:

Alexander has also submitted a port for Contacts. 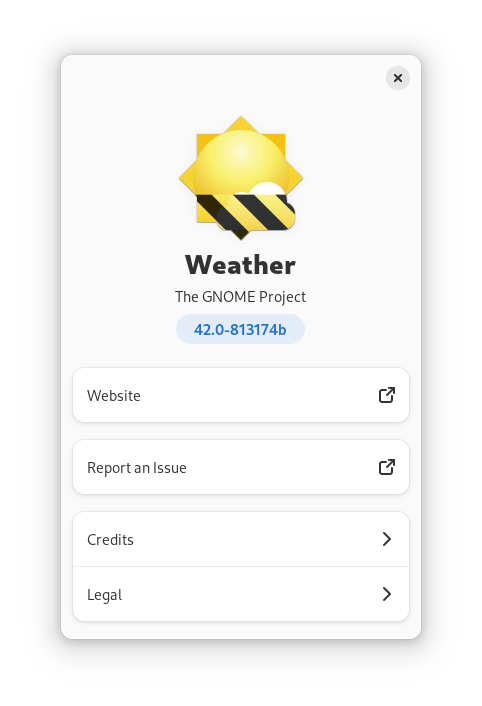 GTK 4.7.1 has been released! This is a new development snapshot towards the 4.8 release, which will be available in GNOME 43. A few of the latest changes:

Thanks to the massive amounts of work of Christian Hergert, Builder was ported to GTK4 and libadwaita. This port was merged this week, and the first unstable release with it (43.alpha0) was published. This version of Builder has a different app-id, org.gnome.Builder.Devel, and therefore needs to be manually installed. Some of the highlights include:

… and a lot more. Many previously available features are still in the works, and anyone interested can help pushing Builder to the finish line by picking any task at the GTK4 port checklist.

Thanks again to Christian Hergert for this exciting and impressive work on Builder! 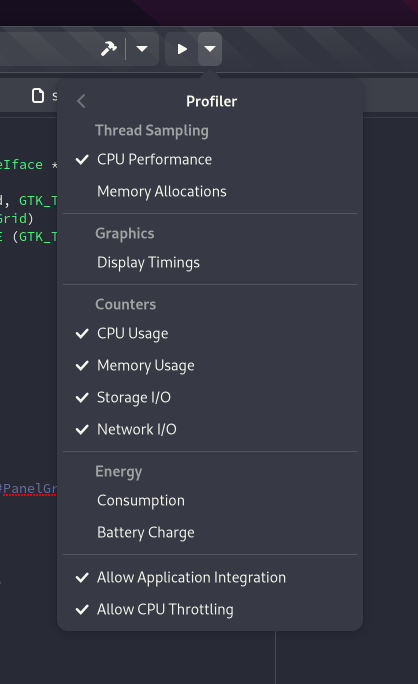 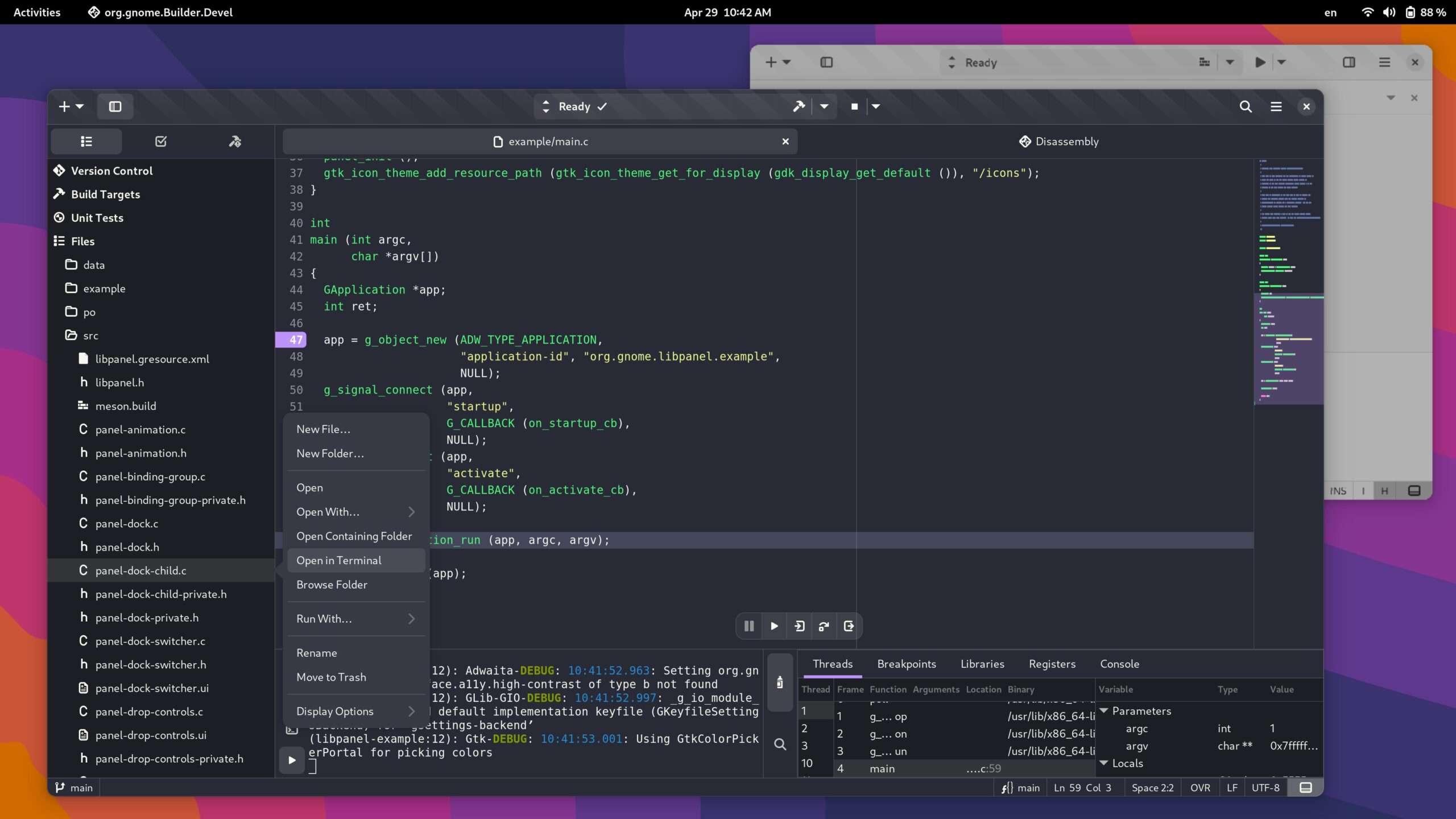 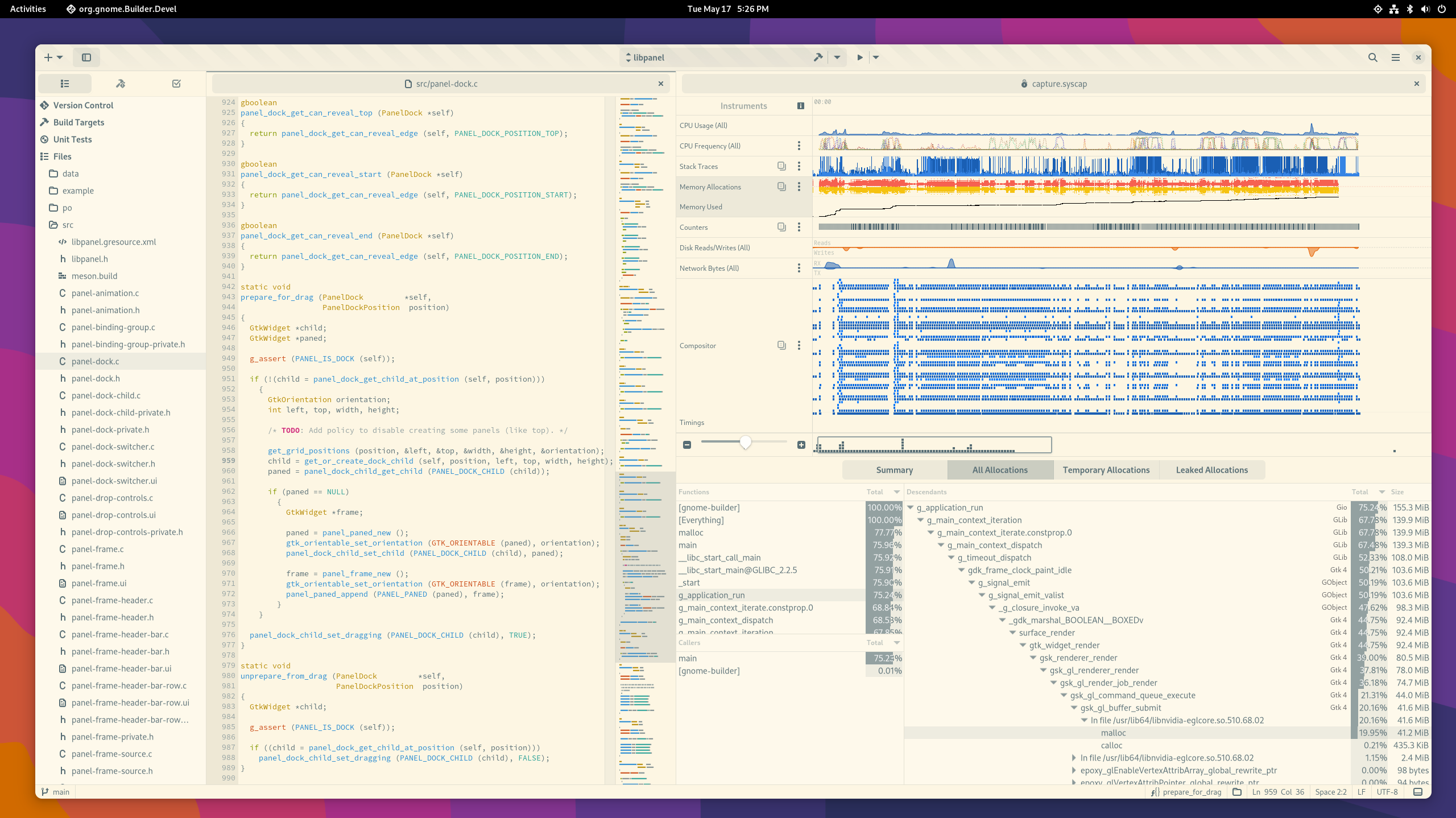 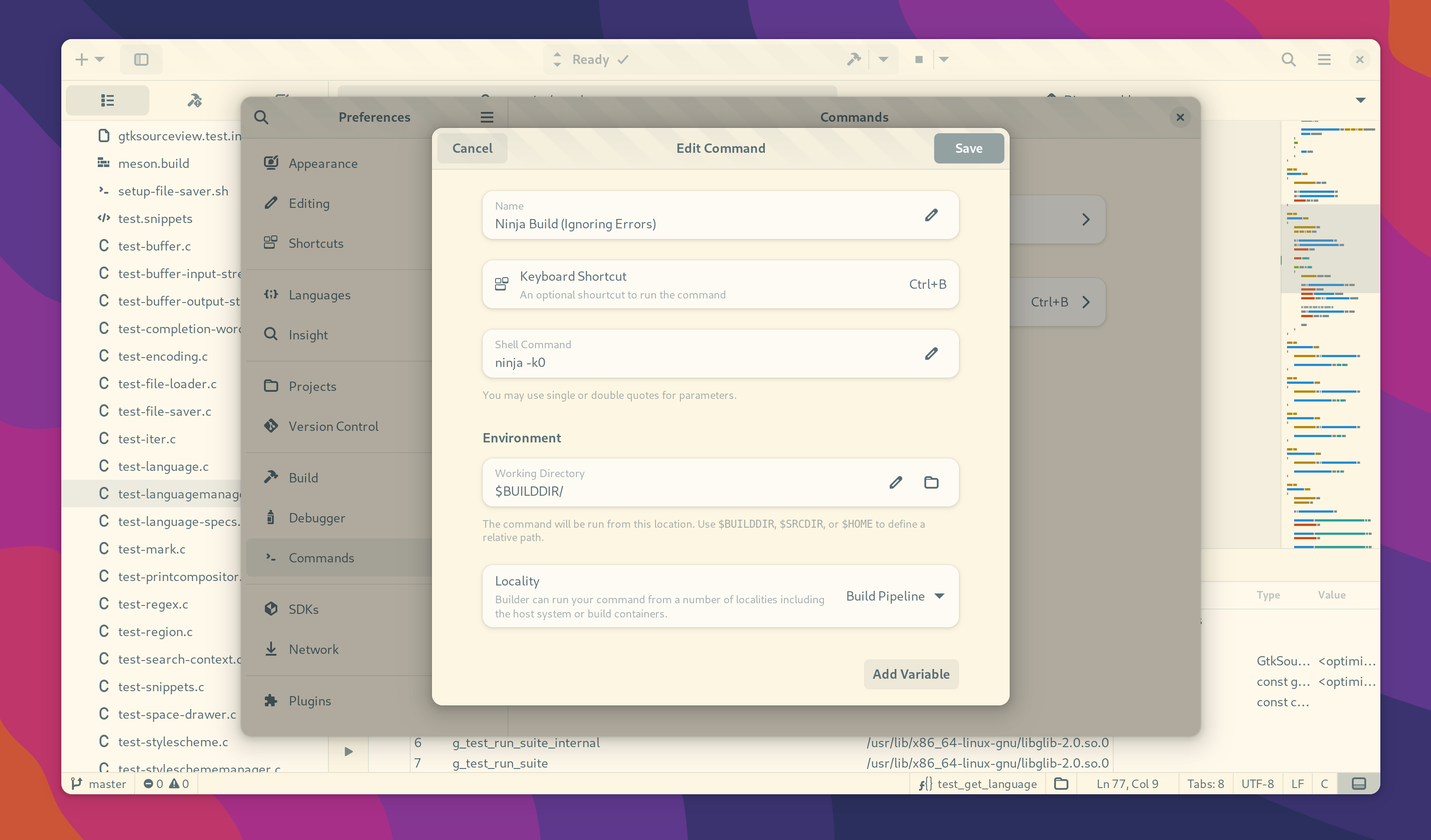 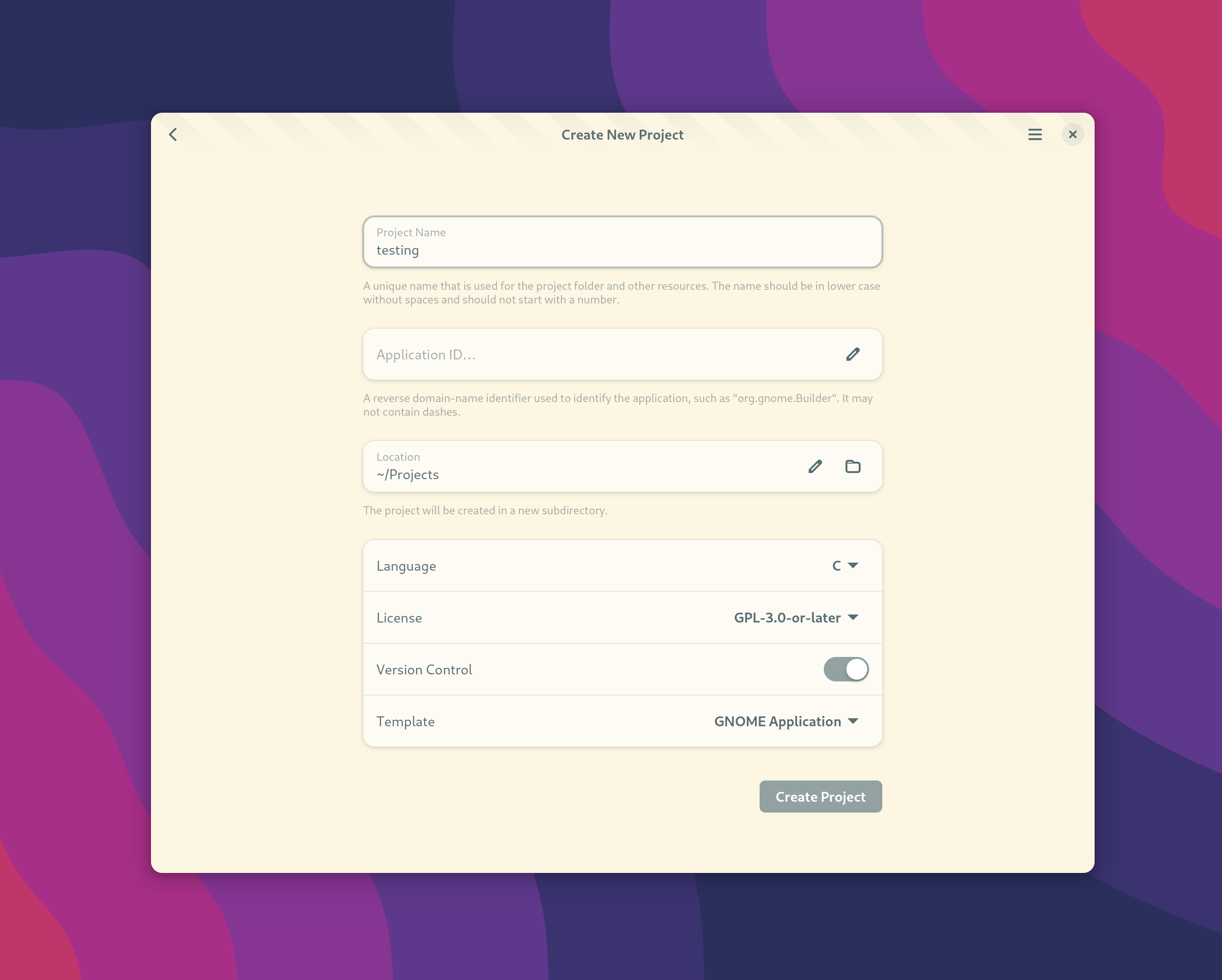 This week, the new Vala website has been released: https://vala.dev

This will be the new starting point for newcomers to the language and hub for Vala-related resources across the web.

Also, we are currently working on a new documentation website. There is still quite a bit missing, so contributors are appreciated!

Furthermore, the Vala Reference Manual has been ported to a new format here. The source code of both is easily accessible through gitlab.

Eventually all these will replace the current Vala wiki pages. 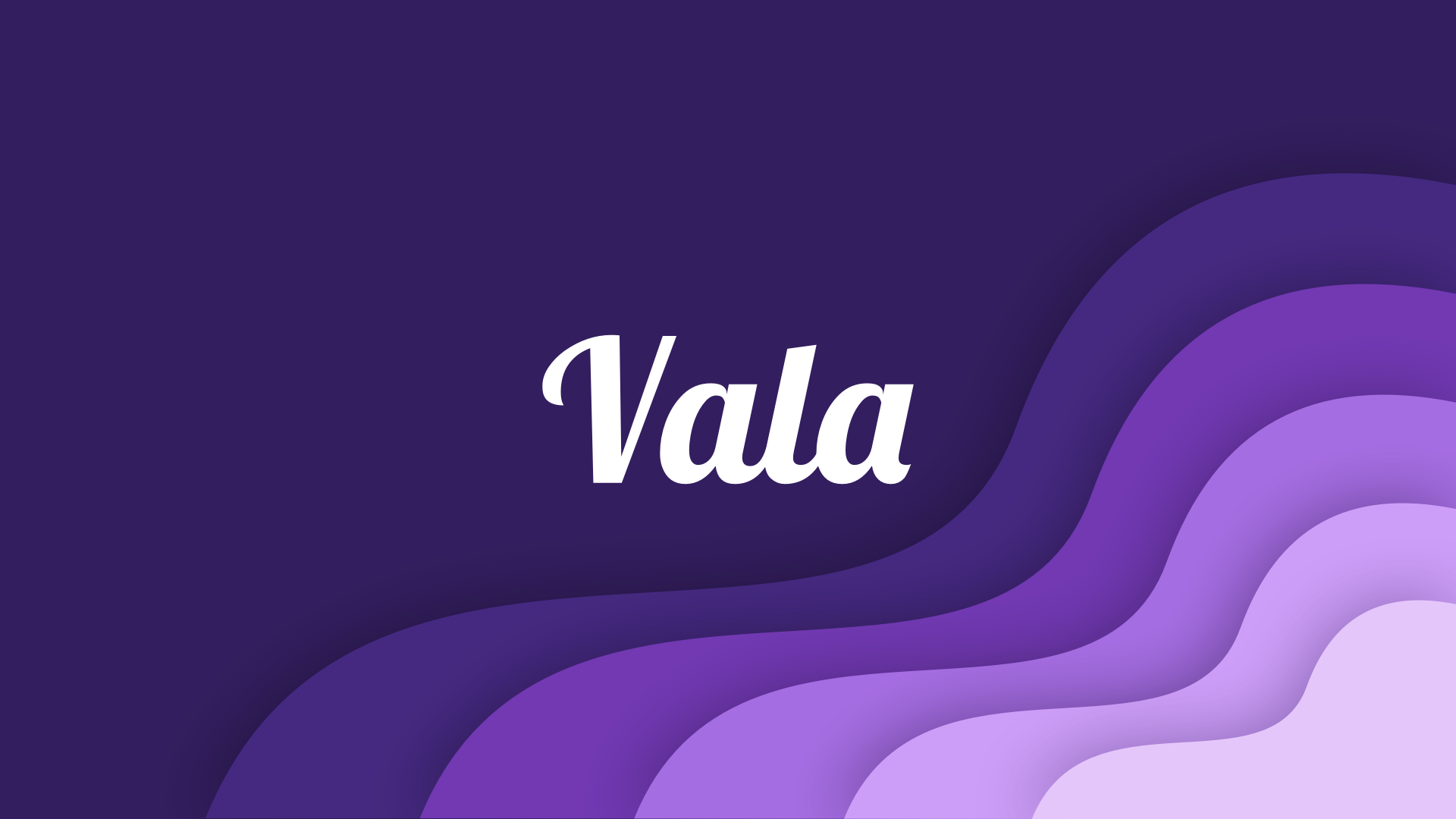 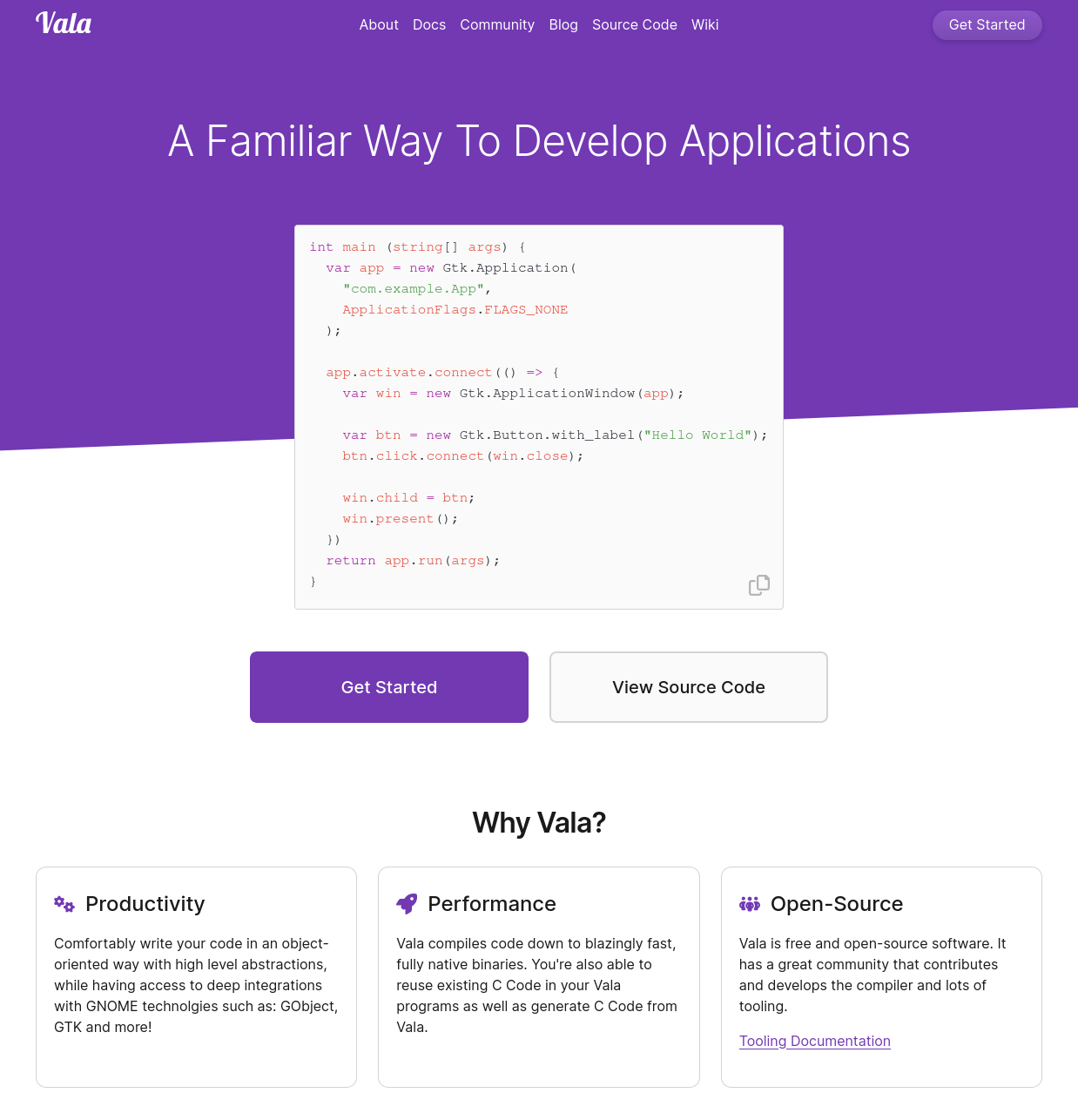 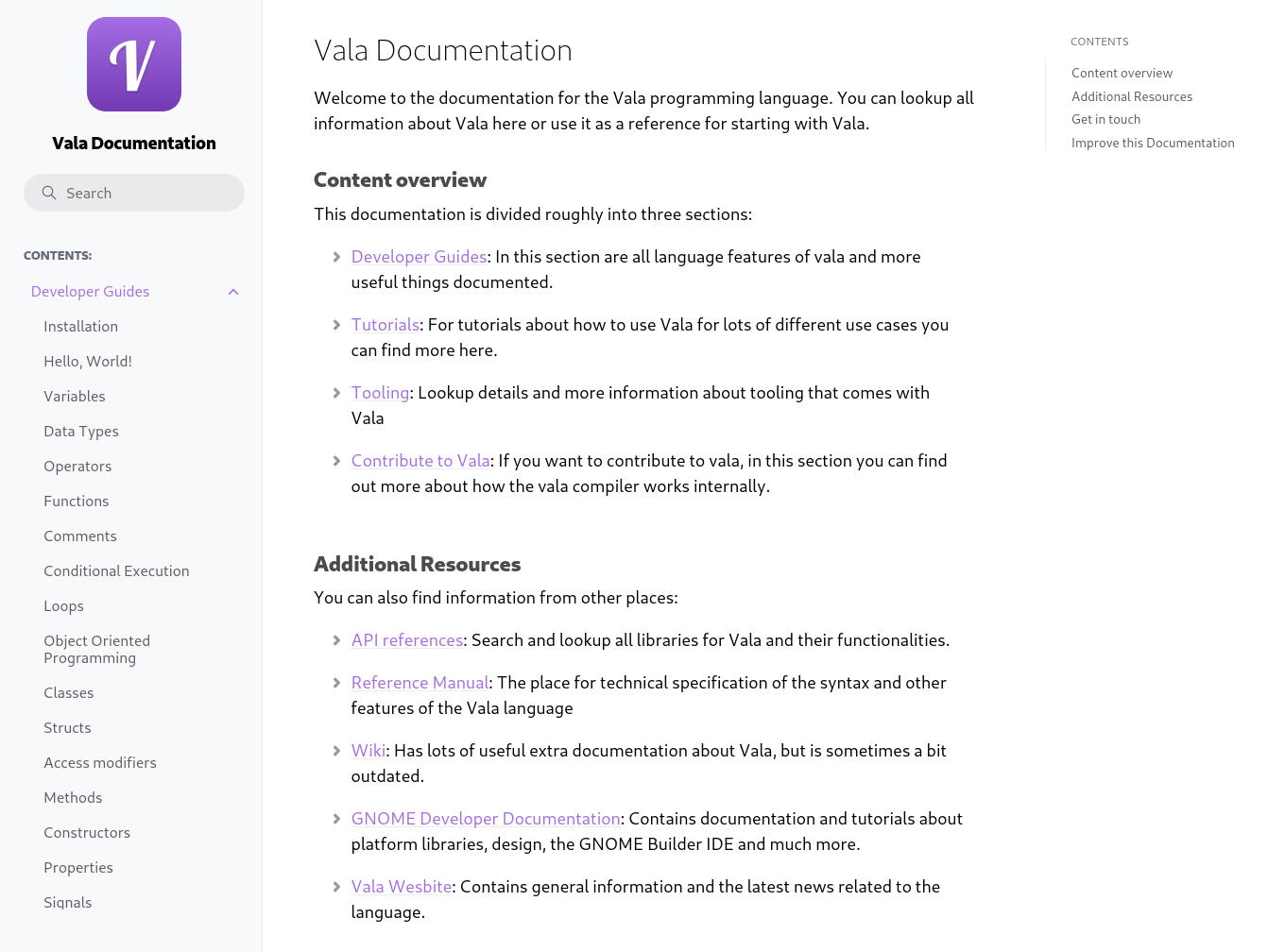 GLib has ported from libpcre to libpcre2, which is a huge amount of work done by Aleksei Rybalkin. It shouldn’t cause any behaviour changes for GRegex users, though.

In GJS 1.73.1, Nasah Kuma landed a more intelligent output display for the interactive interpreter, which pretty-prints objects' properties and values based on their type. This improvement also applies to the log() and logError() functions.

Also in GJS 1.73.1, thanks to Sergio Costas, DBus proxy classes now include methods named with the suffix Async, which perform async calls to DBus APIs and return Promises. This is in addition to the existing suffixes Sync (for blocking calls) and Remote (for async calls with callbacks.)

Another improvement from GJS 1.73.1 from Sonny Piers is an override for Gio.ActionMap.prototype.add_action_entries(). Previously this method wouldn’t work because it required an array of Gio.ActionEntry objects, which are not possible to construct in GJS. Now it can be used with an array of plain objects. (e.g. this.add_action_entries([{name: 'open', activate() { ... }}]); 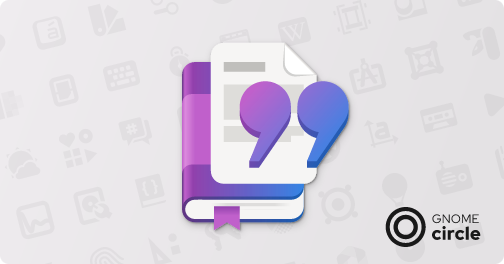 Version 2.11.0 of Gaphor, the simple modeling tool, is out! It adds support for adding elements to diagrams using double click, union types, SysML Enumerations as ValueTypes, and numerous bug fixes. We also greatly improved compatibility with GTK4, and we expect the next release will shift it to be the default version of GTK.

Dialect 2.0.0 has been released! You can get it from Flathub.

It features the following changes:

The first version of the word guessing game Blurble was released this week! Blurble is a GTK clone of Wordle written in Vala and made with localization in mind. 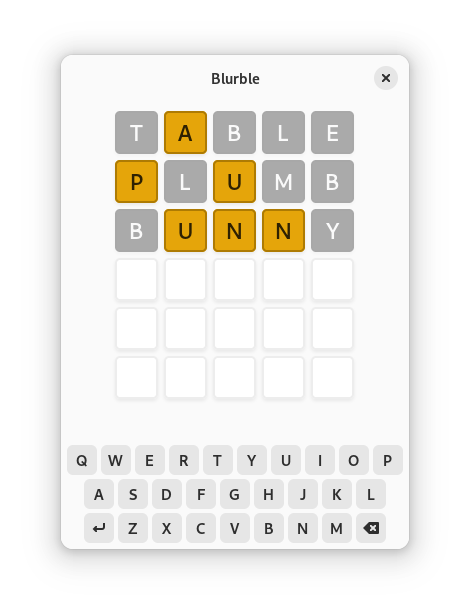 Loupe has been updated to follow new mockups from Allan Day. 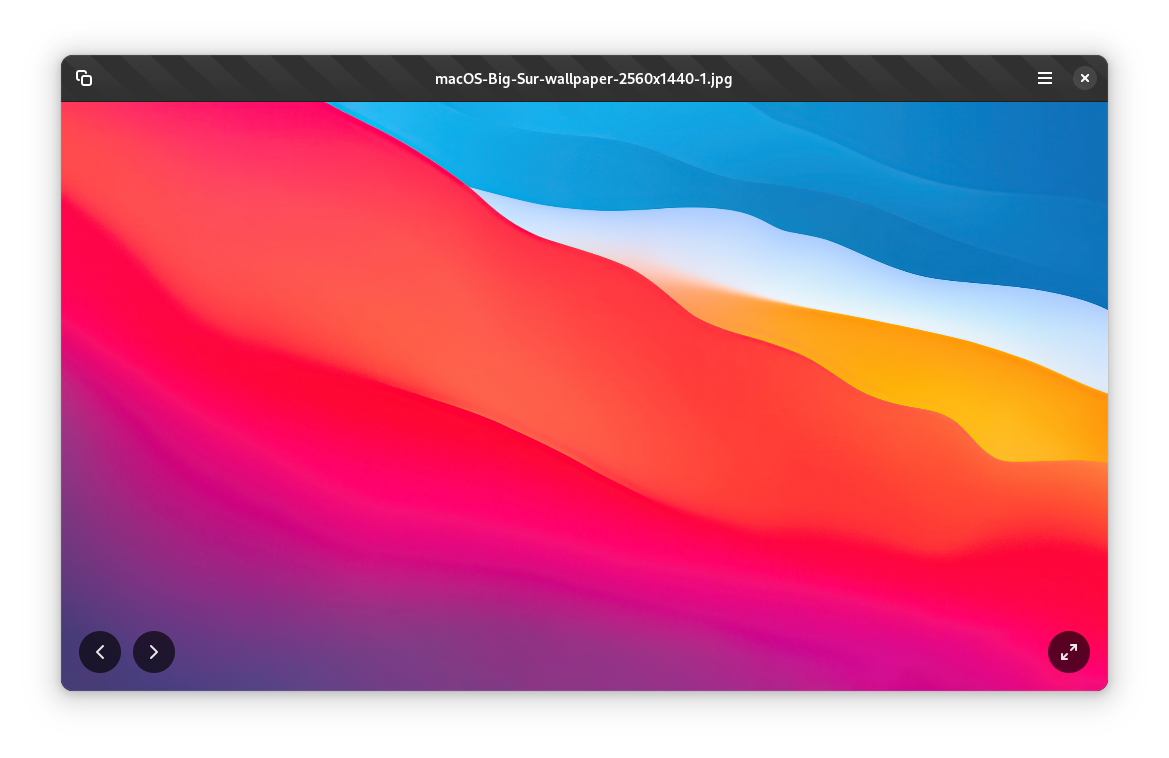 Geary is getting some love again, thanks to Cédric Bellegarde (gnumdk) stepping up to co-maintain it together with me

Crosswords 0.3.3 was released. This is a simple Crossword game for GNOME. New in this version: 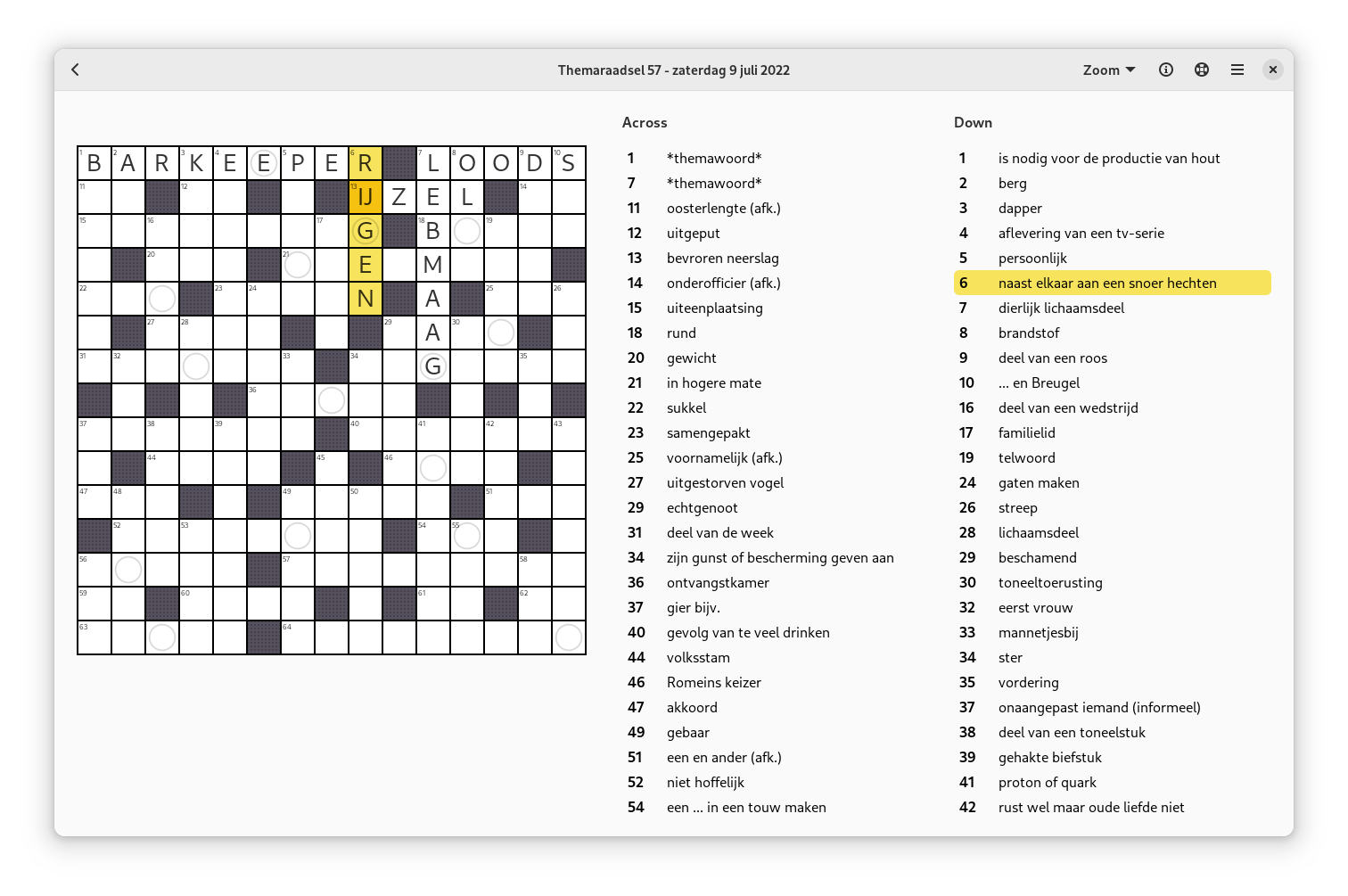 Bottles 2022.7.14 was released! We introduce a new Wine runner called Soda, which will be supported by the Bottles team. The aforementioned runner is based on Valve’s Wine, with the inclusion of patches from Proton, TKG and GE.

We also bring in new installers UI to make the installation process prettier and more fun.

With that out of the way, here are all the changes available in the release page: https://usebottles.com/blog/release-2022.7.14 ! 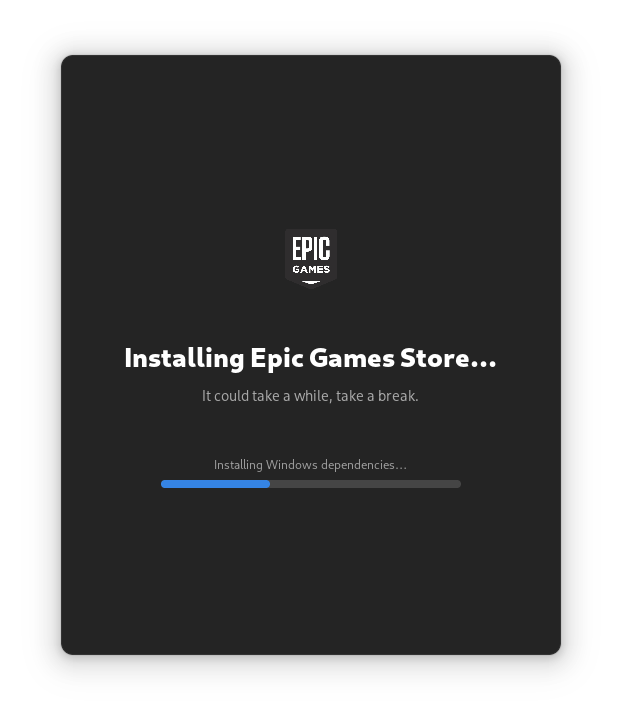 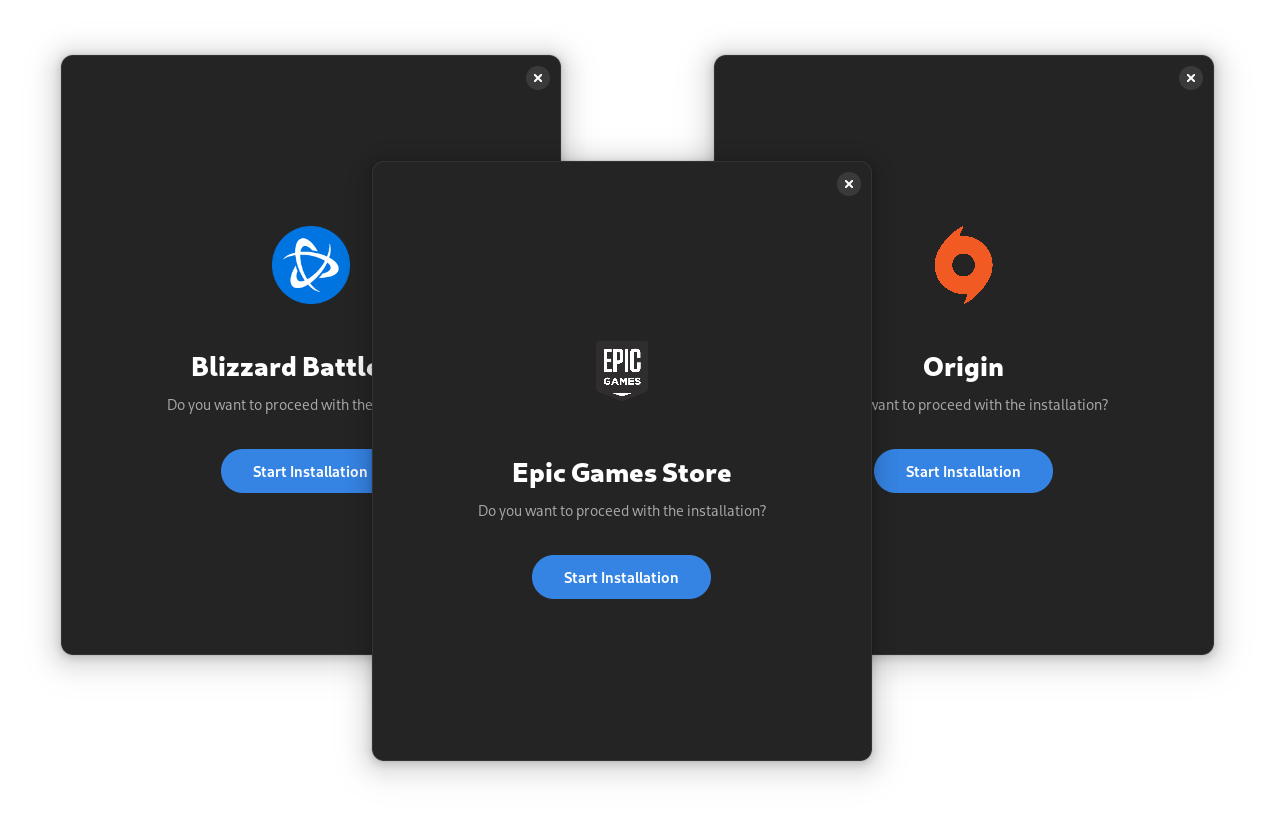 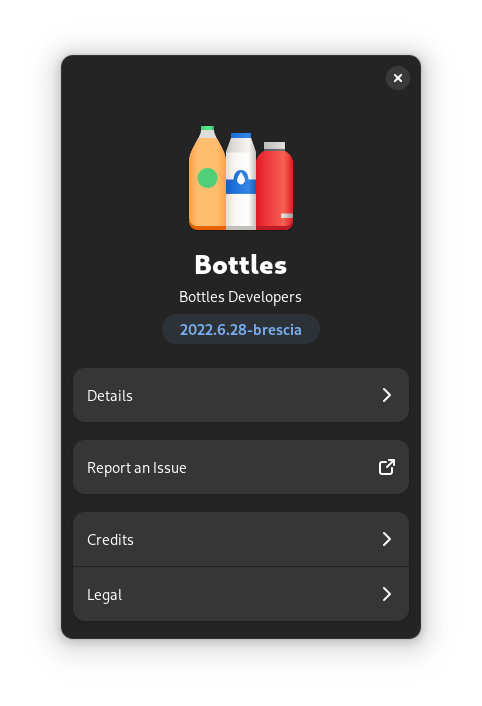